Engagement Rings Vs Weddings Rings: What Is The Difference?

The other day my friend Jack (who is hoping to marry his girlfriend) asked me; “What’s the difference between an engagement and a wedding ring?” It occurred to me that there might be more men out there who needed some clarification on engagement rings V’s wedding rings, so in this post, I am going to make life a little easier and clear it up for you.

What ring goes where?

Firstly, let me start with the practical details of what goes where.

What is an Engagement Ring?

If you have decided that your girlfriend it ‘the one’ and you would like to make it official then you need to start with an engagement ring. Traditionally, it is the man’s job to propose and that includes choosing and buying the ring. This can have even the most confident man breaking out in a sweat… but bear with me…I think I can help…

An engagement ring is a ring given to a woman, from a man, as a sign of betrothal. It is a pledge to marry and comes from the Anglo-Saxon word ‘Troweth’ whose meaning is ‘truth’ or ‘I promise’. The betrothal is the bit where, hopefully, you chose somewhere suitably romantic, you get down on one knee, with the ring, and ask your beloved if she will marry you. 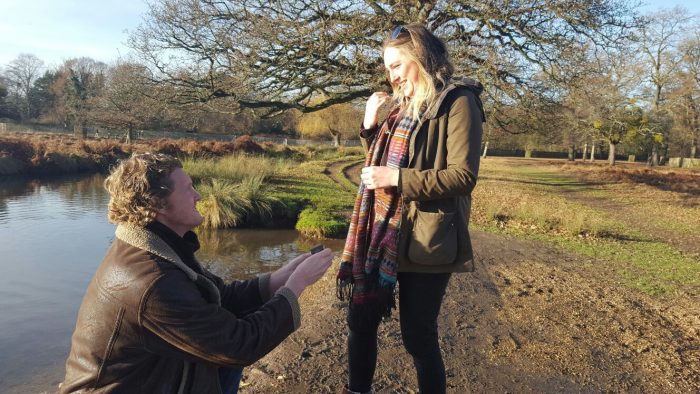 Your choice of ring will be of the utmost importance to your girlfriend as she will want something that suits her personality. You can take clues on this from the way she dresses – Is she classically tailored? (simple diamond solitaire), does she love all things vintage (rose cut or old mine cut diamonds) or does she fall more on the bohemian end of the spectrum? (one-of-a-kind rustic diamonds). Does she like brand labels? (Tiffany) or does she favour handmade stuff? (Artisanal goldsmith). Does she like all things bling and bold or prefer the understated, delicate path?

You will also want to be considering how important is it, to you both, that the choice be an ethical engagement ring, with no exploitation or harm occurring during the mining and making of your ring? Would she appreciate something made with Fairtrade gold where you can let her know from which exact mine the gold used in her ring has come from? For those absolute purists, I would recommend Fairtrade gold with a CanadaMark diamond.

These are just a few questions that will clue you into what type of ring she may prefer. If you still feel hopelessly lost (let’s face it there is a lot of pressure to get it right) you will probably want to enlist the help of her best friend\sister\mother, who may have more of an idea than you do.

The most traditional engagement ring is the brilliant cut diamond solitaire but these days many women want something that has a unique quality, often opting for one-of-a-kind diamonds and stones, such as the rustic diamonds. Rustic diamonds are diamonds that when growing within the earth’s crust mingled together with certain minerals to create a diamond with a cloudy, smoky look, often including swirls and plumes of colour. They have a wonderful earthy, organic appeal and each one is perfectly unique. Also, popular today are diamonds such as an old cut or rose cut that were popular during the Victorian era and are a fusion of romance and history. One thing I know for certain is that many Millennials seem to want to avoid the cookie-cutter choices of their parent’s generation.

How about the ring size?

Ok, so you’ve found the ring but what about getting the size right? My advice would be to take one of the rings she wears on her third finger to a jewellery shop so they can measure it; or again call her best friend/sister/mother and see if;

My advice would be to take one of the rings she wears on her third finger to a jewellery shop so they can measure it; or again call her best friend/sister/mother and see if;

a) she knows the size

b) if she can help you come up with a cunning plan that involved trying on rings without giving the game away.

How much should I spend?

Some say you should spend two to three months salary on an engagement ring but let me tell you; this ‘rule’ was started as a clever marketing ploy by a well-known diamond company. My advice is to go with what feels right. You will know how much to spend because too much or too little will give you an anxious feeling, but just right will, well, feel just right.

What is a wedding ring?

Wedding rings are often plain bands of gold, usually worn by both the man and the women and are exchanged during the wedding ceremony. They were first worn by the Ancient Egyptians who wove them in hemp to signify the union of love and commitment between two people. The Egyptians believed that the third finger on the left hand had a vein that led straight to the heart.

Wedding rings are usually chosen together and to some couples, it is important that their rings are matching, whereas others take a more individual approach and just choose whatever they fancy. This is also true of the engagement and wedding ring. Some want them to match and even fit together, like a puzzle, whilst to others, it’s important that they can distinguish between the two rings and often choose a wedding ring that is a different colour gold (such as rose gold) and a completely different style from the engagement ring. It really is all just a matter of choice.

Wedding rings have gotten fancy in recent times. It used to be that a wedding ring was a simple plain band and indeed within the Jewish religion it is not permitted to have any engraving or gems set in the stone as they believe that a wedding ring should be a simple unbroken circle as this symbolically represents a relationship that is complete. However, many couples love to opt for wedding rings that have diamonds and other gems set into the band for a bit of extra sparkle.

Some people have asked me what’s the difference between a wedding band and a wedding ring. Having lived both in the US and the UK I have found that it is a lot more common to say wedding band in the US; however, it also seems that many people when referring to a wedding band, mean a plain band of gold as opposed to a wedding ring which will be set with diamonds or made in a style which is not a traditional looking band.

So, there you have it. I hope I have clarified some of the major points. Now all I can say is…good luck…and I hope she says yes!

And if you are looking for a one of a kind wedding ring or engagement ring, don’t forget to take a look at the offerings on the website.