Should I Buy An Ethical Engagement Ring?

Your engagement ring will probably be the most precious (both in monetary and sentimental value) piece of jewellery you will ever own.  It represents the hope and promise of a life to be lived together. It is the start of your journey into married life that may well include children and grandchildren.  It is a knowing that you have found the one to walk by your side on this crazy journey we call life.  It is a happy time, a blessed time!

All of these feelings of hope, love and promise are expressed symbolically through this one ring; a ring that will be cherished forever, destined to become a family heirloom with a story to tell.

Sometimes a man may be brave enough to choose the ring for himself and surprise his bride to be and others may find the ring they love together. Whatever way you reach the moment of deciding to buy a ring you may want to pause a minute and have a think about the provenance and history of the materials that went into the making of it.

What happens if the ring I choose to buy is not an ethical engagement ring?

The world of gold mining is a dark and destructive force; in fact, it represents the exact opposite of all the lovely feelings I have just described above.  Let me explain:

Gold mining is one of THE most destructive practices in the word today and is responsible for many horrendous human rights violations as well as harmful environmental processes.

I know right? Who wants to wear an engagement ring that violated others human rights?!

Let’s take a look at how these rights have been violated:

If that is not enough to convince you to buy an ethical engagement ring, let’s take a look at the destruction it causes to the environment: 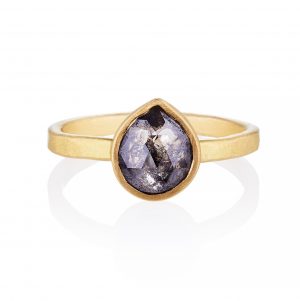 Can I buy an ethical engagement ring that has been made with recycled gold?

Many jewellers have jumped on the ethical marketing bandwagon and have adopted the use of the term ‘recycled gold’ claiming it to be ethical or eco gold; but here’s why it doesn’t live up to its ethical credentials:

So, there you have it. Now you know…

I certainly would not want to look at my forever engagement ring and think of all the bad shit that had happened along the way (death, destruction, trafficking and slavery) just for it to reach my second finger on the left. It would make me feel so sad. Which is why I only use certified Fairtrade gold that can be traced back to its origins with a fully transparent history.

Hopefully, this information has helped you make an informed choice about the ring you decided to buy for your engagement or any other gold jewellery you may consider buying in the future.

What type of ethical engagement ring should I buy?

One that has been made with 100% certified Fairtrade gold with conflict-free stones and gemstones.